Early in the Book of Genesis we have mention of the way to the tree of life. (Gen 3:24 NIV) After he drove the man out, he placed on the east side of the Garden of Eden cherubim and a flaming sword flashing back and forth to guard the way to the tree of life. How fitting it was that the people of God came to be called “The People of the Way”. Such a name for the Church would indeed be more appropriate today and convey a clear message of our calling.

Jesus also said: (John 14:6 NIV) “I am the way and the truth and the life. No one comes to the Father except through me.

The Book of Acts contains several mentions of ‘the way’. For example, Paul said: (Acts 24:14 NIV) However, I admit that I worship the God of our fathers as a follower of the Way, which they call a sect. I believe everything that agrees with the Law and that is written in the Prophets,

To know the way of the Lord places our feet on the pathway that has guided the saints down through the ages. 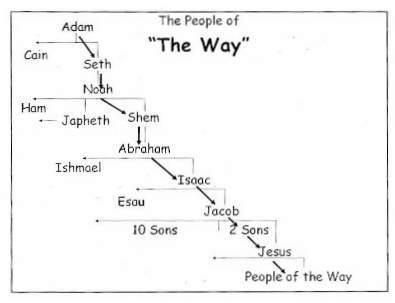 We all need/want to have a prayer life that has reality and impacts upon those we love and ourselves in the bringing of God’s grace into our lives. We all seek the way and the how.

James the Apostle said about this problem: James 5:16 (NIV) Therefore confess your sins to each other and pray for each other so that you may be healed. The prayer of a righteous man is powerful and effective.

James follows this comment with a story about Elijah and uses it as an example of effective prayer. James points out that Elijah was human like us all and no different in his make up.

(James 5:17 NIV) Elijah was a man just like us. He prayed earnestly that it would not rain, and it did not rain on the land for three and a half years.

James also said: James 1:6-8 (NIV) But when he asks,he must believe and not doubt, because he who doubts is like a wave of the sea, blown and tossed by the wind. 7 That man should not think he will receive anything from the Lord; 8 he is a double-minded man, unstable in all he does.

These texts draw out aspects of prayer.

i. the need to be righteous and touch the power of God.
ii.the need to know God. (no communication if we are not known)
iii.no wavering about and changing our minds.

These same truths guided Elisha in his footsteps along the Way and his walk remains as an example to us as we seek closer fellowship with our Lord.

Elisha and the way

When the time came for his master Elijah to be taken by the Lord, Elisha insisted on staying with him for he sought the way to the power of God. He did not waver or change his mind. As these two men of God traveled they visited four places that relate to our pathway as “People of the Way”

Gilgal (the reproach is rolled away)

(Josh 5:8-10 NIV) And after the whole nation had been circumcised, they remained where they were in camp until they were healed. Then the LORD said to Joshua, “Today I have rolled away the reproach of Egypt from you.” So the place has been called Gilgal to this day. Onthe evening of the fourteenth day of the month, while camped at Gilgal on the plains of Jericho, the Israelites celebrated the Passover.

A picture to us of finding favor with God in salvation. Our salvation brings the circumcision of the heart and our healing.

Bethel (the house of God)

(Gen 28:17-19 NIV) He was afraid and said, “How awesome is this place! This is none other thanthe house of God; this is the gate of heaven.” Early the next morning Jacob took the stone he had placed under his head and set it up as a pillar and poured oil on top of it. He called that place Bethel though the city used to be called Luz.

The house of God is no longer Bethel but is today the Ecclesia, the living temple of God.

(Heb 10:25 NIV) Let us not give up meeting together, as some are in the habit of doing, but let us encourage one another—and all the more as you see the Day approaching.

The stop at Bethel reminds us of the need of regular gathering together as the house of God. However to be satisfied with just attending speaks of immaturity in our walk and a stunting of growth. Elijah did not stop here and Elisha followed him.

Jericho (high and lifted up, fragrance)

Jericho was in that day the home of the school of prophets. A place of study and learning. Prophets were men who ministered by speaking as the oracle of God. They needed to be learned men. Elijah and Elisha visited but did not stop here.

(2 Tim 2:15 NIV) Do your best to present yourself to God as one approved, a workman who does not need to be ashamed and who correctly handles the word of truth.

The need to study the Word of God is also part of our walk. Such study has a sweet fragrance but also a danger that we become high and lifted up in pride because of our knowledge.

(John 5:39-40 NIV) You diligently study the Scriptures because you think that by them you possess eternal life. These are the Scriptures that testify about me, yet you refuse to come to me to have life.
(2 Tim 3:5 NIV) having a form of godliness but denying its power. Have nothing to do with them.
(2 Tim 3:7 NIV) always learning but never able to acknowledge the truth.

The place of separation and death.

(Rom 6:11 NIV) In the same way, count yourselves dead to sin but alive to God in Christ Jesus.

Elisha faces the final test of his discipleship. In an act of devotion he crosses Jordon with Elijah his master and separates himself from the prophets of Jericho and Bethel the house of God. (v.2 “I will not leave you”)

This must have taken courage as well as devotion. Elijah was to be taken by God. This could be the end of both of their lives. Elisha had to be willing to die to this life in an this act of separation.

{7} Fifty men of the company of the prophets went and stood at a distance, facing the place where Elijah and Elisha had stopped at the Jordan. Elijah took his cloak, rolled it up and struck the water with it. The water divided to the right and to the left, and the two of them crossed over on dry ground.

So it is with the disciple of today. There is need to be separated from the people of God, outside the camp, alone with the Master that He might speak to us and reveal His way to each of us. Isolation leads to revelation.

In this place of separation Elisha was given sight into spiritual realm and a revelation of the fire of God surrounding his master and a double portion of Elijah’s spirit came upon him.

{9} When they had crossed, Elijah said to Elisha, “Tell me, what can I do for you before I am taken from you?” “Let me inherit a double portion of your spirit,” Elisha replied. “You have asked a difficult thing,” Elijah said, “yet if you see me when I am taken from you, it will be yours—otherwise not.” As they were walking along and talking together, suddenly a chariot of fire and horses of fire appeared and separated the two of them, and Elijah went up to heaven in a whirlwind. Elisha saw this and cried out, “My father! My father! The chariots and horsemen of Israel And Elisha saw him no more. Then he took hold of his own clothes and tore them apart.

Elisha came back from that solitary place on the far side of Jordon in the Power of God.

He picked up the cloak that had fallen from Elijah and went back and stood on the bank of the Jordan. Then he took the cloak that had fallen from him and struck the water with it. “Where now is the LORD, the God of Elijah?” he asked. When he struck the water, it divided to the right and to the left, and he crossed over. The company of the prophets from Jericho who were watching, said, “The spirit of Elijah is resting on Elisha.” And they went to meet him and bowed to the ground before him.

All who are called to be disciples of the Lord have this privilege of crossing into the secret place and being with our Master. To those who are His servants the Lord will reveal His nature by showing them the beauty of the things that are created. To His friends He will reveal His plans as the Holy Spirit leads them into all truth but to the son/daughter who walks in the Spirit and knows Him in the secret place He reveals His heart.

(Mat. 25:2-4 NIV) Five of them were foolish and five were wise. The foolish ones took their lamps but did not take any oil with them. The wise, however, took oil in jars along with their lamps.
(Heb 13:13-14 NIV) Let us, then, go to him outside the camp, bearing the disgrace he bore. For here we do not have an enduring city, but we are looking for the city that is to come.