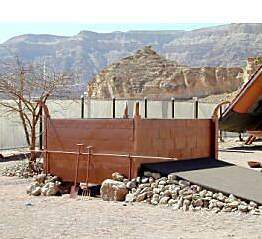 Throughout the Scriptures there has been a progressive revelation of the altar of sacrifice. This is implied when God made the first sacrifice for man’s sin in the Garden of Eden.

(Gen 3:21 NIV) The LORD God made garments of skin for Adam and his wife and clothed them.

Noah: (Gen 8:20 NIV) Then Noah built an altar to the LORD and, taking some of all the clean animals and clean birds, he sacrificed burnt offerings on it.

Abraham: (Gen 12:7 NIV) The LORD appeared to Abram and said, “To your offspring I will give this land.” So he built an altar there to the LORD, who had appeared to him.

Isaac: (Gen 26:25 NIV) Isaac built an altar there and called on the name of the LORD. There he pitched his tent, and there his servants dug a well.

Jacob: (Gen 35:1 NIV) Then God said to Jacob, “Go up to Bethel and settle there, and build an altar there to God, who appeared to you when you were fleeing from your brother Esau.”

All these altars add line upon line to the truth concerning the one perfect sacrifice of the cross. The word altar in Hebrew has the meaning ,” a place of slaughter” and “being lifted up”. In Greek it carries the thought of slaying and the burning of victims. Isaiah Chapter 53 is the great prophesy concerning the fulfillment of the of sacrificial offering.

Build an altar of acacia wood

(Exo 27:1 NRSV) You shall make the altar of acacia wood, five cubits long and five cubits wide; the altar shall be square, and it shall be three cubits high.

This wood was used throughout the tabernacle and speaks of Christ’s sinless and incorruptible humanity. Neither did His body see corruption when it was laid in the tomb.

Typified by Isaac, the only begotten son of the Old Testament who carried wood for his typical sacrifice, Jesus carried a wooden cross, upon which He was sacrificed.

(Gen 22:6 NRSV) Abraham took the wood of the burnt offering and laid it on his son Isaac, and he himself carried the fire and the knife. So the two of them walked on together.

(John 19:17 NRSV) and carrying the cross by himself, he went out to what is called The Place of the Skull, which in Hebrew is called Golgotha.

The wooden cross was His altar AND our altar.

Heb 13:10 (NIV) We have an altar from which those who minister at the tabernacle have no right to eat.

The altar measured 5 x 5 cubits and was 3 cubits high. It was square or four cornered.

Overlay it with bronze

(Exo 27:2 NIV) Make a horn at each of the four corners, so that the horns and the altar are of one piece, and overlay the altar with bronze.

Bronze is a metal implying strength, and judgement against sin. In the tabernacle bronze is characteristic of the outer court and its furniture. It was in the outer court that sin was judged. First the sacrificial cleansing by the blood of the sacrifice, followed by ceremonial washing to cleanse from defilement.

This idea is well illustrated in Deut. 28:15-23 where the heavens were to be bronze to the sinful. i.e. they would be cut off from God and instead of mercy there would be judgement.

Israel murmured against God and serpents came as judgement. When the people repented, a bronze serpent was uplifted on a pole and by looking upon it they were healed.

John 3:14-15 (NIV) Just as Moses lifted up the snake in the desert, so the Son of Man must be lifted up, that everyone who believes in him may have eternal life.

At Calvary Jesus fulfilled this bronze serpent prophecy. He was judged for us as He was lifted up so typifying the serpent on a pole. Later as we examine the whole tabernacle we will see that the bronze altar is representing the feet of Christ. This is where we begin: at His feet.

There are three layers in the construction of the altar.

i. Bronze within, is symbolic of the Holy Spirit who dwells within. His ministry as the Spirit of judgement (Isaiah.4:4.) is to convict the world of sin, righteous and judgement.

ii. Wood in the midst, reminds us of the wooden cross upon which the central one of the Godhead was judged for us.

iii. Bronze without, points us to the Father who is the judge of all. He judged the Son for our sin and our sins.

Make poles of Acacia wood and overlay them with bronze

(Exo 27:6 NIV) Make poles of acacia wood for the altar and overlay them with bronze.

The disciple is called to take up or carry the cross and follow Jesus. The poles were used to carry the altar on a pilgrimage to the Promised Land. The church is also on a similar journey.

(Luke 14:27 NIV) And anyone who does not carry his cross and follow me cannot be my disciple.

The bronze altar was placed between the laver and the doorway into the tabernacle. It was the first piece of furniture that was seen upon entry into the outer court. This was the largest piece of furniture and no person could come into fellowship with God without first coming by way of the altar of bronze. So also with the sinner in the church age … first the cross.

Man’s approach to God must start with the sin question. All must come to the cross of our Lord Jesus Christ to obtain forgiveness and God’s grace.

The altar was first covered with a bronze plate made from the censers of the rebellious Korah and company. This source would have reminded Israel of God’s judgement on rebellion and sin.

Then the altar was covered with purple. It is interesting that scarlet and blue make up purple, which was the colour of royalty in those days. Jesus was clothed in purple at His crucifixion.

(Mark 15:17 NRSV) And they clothed him in a purple cloak; and after twisting some thorns into a crown, they put it on him.

Over all a cloth of skins gave no clue as to the divine beauty within.

For the life of a creature is in the blood,

(Lev 17:11 NRSV) For the life of the flesh is in the blood; and I have given it to you for making atonement for your lives on the altar; for, as life, it is the blood that makes atonement.

This is the message of the bronze altar. It speaks to us of the blood atonement. Being typical of the cross it was the only place where an offering for sin could be made.

At the bronze altar the Israelite expressed and declared his faith in God through the substitutionary death of the innocent victim. They had faith in the blood as an atonement.