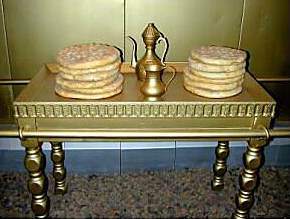 This was the second item of furniture mentioned in Exod 25. No record exists as to its actual shape or detail. It was made of Acacia wood covered with fine gold. Its position was opposite the Golden Lampstand in the Holy Place. Upon the table were placed twelve loaves that were eaten by the priests in due course. It was made exactly according to the pattern given by God to Moses. It typifies the Lord Jesus Christ as the Bread of Life

(John 6:35 KJV) And Jesus said to them, I am the bread of life: he that comes to me shall never hunger; and he that believes on me shall never thirst.

Jesus was born in the town of Bethlehem. (The House of Bread)

David spoke prophetically about the spiritual table in

Psalm 23:5. “You prepare a table before me in the presence of my enemies.”

It takes the light from the Golden Lampstand to make the table visible. Unless we walk in the light and guidance of the Word of God (the bible) we will be unable to see the truth of the Table of the Lord. (Communion)

i. of pure gold. Represents divinity.
ii. of acacia wood. A hard, incorruptible wood, a type of the humanity of Jesus.
iii. after a divine pattern. So also must the church be after God’s plan.
iv. 2 x 1 x 11/2 cubits. (.9 x .5 x .7 metres.)
v. carrying rings on each corner. A pilgrim walk, here we have no continuing city.
vi. four feet. The number four is indicative of earth, and feet is usually about our walking with God.

(Rom 10:15 KJV) And how shall they preach, except they be sent? as it is written, How beautiful are the feet of them that preach the gospel of peace, and bring glad tidings of good things!

The Bread of the Presence always before God

(Exo 25:30 NIV) Put the bread of the Presence on this table to be before me at all times.

This bread had a number of names that reveal to us the aspects of truth hidden in the physical symbol.

i The Bread of Order or Arrangement. :

A row, pile, arranged in order. The bread was set out in rows before the Lord. In a similar way there is to be order around the New Testament table of the Lord.

ii. The Bread of Face.(s) A consciousness of being face to face with God was always in the awareness of the priests.

(2 Cor 4:6 NIV) For God, who said, “Let light shine out of darkness,” made his light shine in our hearts to give us the light of the knowledge of the glory of God in the face of Christ.

iii. The Bread of Presence.

The bread was to the priests a visible token of a spiritual reality. They were partakers of the Lord and in the same way the New Testament communion table becomes a reality in the spirit as we partake of His divine nature.

(John 6:51 NIV) I am the living bread that came down from heaven. If anyone eats of this bread, he will live forever. This bread is my flesh, which I will give for the life of the world.”

(John 6:56 NIV) Whoever eats my flesh and drinks my blood remains in me, and I in him.

Choice or fine flour comes after the wheat has been crushed to powder. No impurity or roughness. This is the perfect example of Christ Bruised and crushed for us but without sin.

(Psa 147:14 NRSV) He grants peace within your borders; he fills you with the finest of wheat.

(Isa 53:5 NRSV) But he was wounded for our transgressions, crushed for our iniquities; upon him was the punishment that made us whole, and by his bruises we are healed.

(Lev 24:5 NRSV) You shall take choice flour, and bake twelve loaves of it; two-tenths of an ephah shall be in each loaf.

Fire brings testing and purging. It often speaks of suffering such as happened at Calvary.

One for each of the tribes of Israel. All were represented before the Lord. So also with Spiritual Israel. We are one bread

The one bread was made into twelve loaves. Twelve symbolizes apostolic fullness and government and Jesus gave the bread of life first to the twelve apostles who broke it to the saints. (The bread which we break !)

two tenths of an epah for each loaf

(Lev 24:5 NRSV) You shall take choice flour, and bake twelve loaves of it; two-tenths of an ephah shall be in each loaf.

Gold plates, spoons, bowls and pitchers were used in connection with the table’s services.

Traditionally this service included a libation of wine for a drink offering. It is clear that the priests could not drink any fermented wine in the Holy Place.

(Lev 10:9 NRSV) Drink no wine or strong drink, neither you nor your sons, when you enter the tent of meeting, that you may not die; it is a statute forever throughout your generations.

Usually a libation was poured out upon the ground. This happened to the blood of Jesus. To drink this wine the priest would need to take it outside the Tent of Meeting. Unless the wine was unfermented.

(Mat 26:27-28 NRSV) Then he took a cup, and after giving thanks he gave it to them, saying, “Drink from it, all of you; [28] for this is my blood of the covenant, which is poured out for many for the forgiveness of sins.

Pure incense as a memorial

(Lev 24:7 NRSV) You shall put pure frankincense with each row, to be a token offering for the bread, as an offering by fire to the LORD.

As the priests came to the table to eat they took of the frankincense, not to eat but to sprinkle it on the fire of the Golden Altar. Perfume then arose as an offering to God. This was the only offering at this time. The finished work lay on the table for the priest to eat and they gave thanks by burning the frankincense. So also in the church. We do not and cannot offer up the bread and wine as a sacrifice. It is food and drink for the Royal Priesthood. Our frankincense is the prayers of the Saints.

This was a service in memory of … Jesus said we are to take communion “in memory of Him.”

(Luke 22:19-20 NRSV) Then he took a loaf of bread, and when he had given thanks, he broke it and gave it to them, saying, “This is my body, which is given for you. Do this in remembrance of me.” [20] And he did the same with the cup after supper, saying, “This cup that is poured out for you is the new covenant in my blood.

The bread was set out fresh every Sabbath day. Jesus as our Sabbath bread is fresh always. He is the complete bread and our true Sabbath rest, for He is the baptizer with the Holy Spirit. True rest is only found in His finished work and the acceptance of ALL He offers to us.

The Bread belongs to Aaron and his sons

(Lev 24:9 NRSV) They shall be for Aaron and his descendants, who shall eat them in a holy place, for they are most holy portions for him from the offerings by fire to the LORD, a perpetual due.

The bread was to be eaten by Priests only. In the New Covenant all believers are called to a Spiritual Priesthood. (1.Pet.2:9.) The Table of the Lord is a table for believers. Note that the table is “Most Holy”

They shall eat it in A Holy Place

(Lev 24:9 NRSV) They shall be for Aaron and his descendants, who shall eat them in a holy place

The bread was never eaten in an unholy place. Most writers suggest it was a meal taken in the Holy Place where the light of the lampstand and the perfume of the altar of incense brought illumination and perfume to the most Holy.

Such an example illustrates to the church the sacred nature of the Communion and the need for us all to be walking in the light with a humble and repentant heart as we approach the Lord’s table.

The Corn of Wheat

(John 12:24 NRSV) Very truly, I tell you, unless a grain of wheat falls into the earth and dies, it remains just a single grain; but if it dies, it bears much fruit.

Jesus came the first time as the corn of wheat, to be broken for us, to endure the fire of Calvary and go into the grave. He rose as the perfect ever present and perfect Bread of Life for the church. When Israel wandered in the wilderness they found in the manna bread, life, healing, divine health, spiritual nourishment, fellowship and communion so in Christ Jesus we find all these provisions.

Bread was the staff of life to Israel after the flesh. The history of the nation abounds in references to bread and its importance in the spiritual and economic life of the people of God.

(Gen 14:18 NRSV) And King Melchizedek of Salem brought out bread and wine; he was priest of God Most High.

This reference should be read in connection with the subject of the Table of the Lord. In these Scriptures we find Abraham meeting with the king named Melchizedek. This was a theophany of our Lord Jesus and was the first “shadow picture” of the Communion Table.

THEY DEVOTED THEMSELVES TO THE APOSTLES TEACHING AND TO THE BREAKING OF BREAD … (Acts.2:42.)