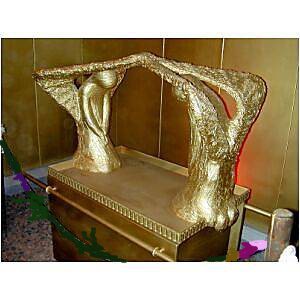 Ark means a box in which something is laid up or preserved. This was the first item God instructed Moses to build for His dwelling place among Israel. It was to be the only piece of tabernacle furniture that found a place in all three of the sanctuaries of the Lord discussed in Scripture.

This “ark” was to be God’s mercy seat and the place where His glory was manifest to the people. The Ark represents the fullness of the Godhead bodily.

(Psa 80:1 KJV) Give ear, O Shepherd of Israel, thou that leadest Joseph like a flock; thou that dwellest between the cherubims, shine forth.

Made of Acacia wood

A hard orange-brown wood that is extremely durable. (incorruptible) This wood is a fitting type of the sinless, incorruptible humanity of Jesus. He was a root from dry ground He was the “Branch” of the Old Testament. Note the colour. Not white or black but orange brown … all races?

(Isa 4:2 NIV) In that day the Branch of the LORD will be beautiful and glorious, and the fruit of the land will be the pride and glory of the survivors in Israel.
(Isa 53:2 NIV) He grew up before him like a tender shoot, and like a root out of dry ground. He had no beauty or majesty to attract us to him, nothing in his appearance that we should desire him.
(Jer 23:5 NIV) “The days are coming,” declares the LORD, “when I will raise up to David a righteous Branch, a King who will reign wisely and do what is just and right in the land.
(Zec 3:8 NIV) “‘Listen, O high priest Joshua and your associates seated before you, who are men symbolic of things to come: I am going to bring my servant, the Branch.

The Circumference of the top = 8 cubits (8 = resurrection. )

Overlay it with pure gold

(Exo 25:11 NIV) Overlay it with pure gold, both inside and out, and make a gold molding around it.

Gold is always symbolic of divine nature. In the ark are combined the divine and the human. (gold & wood.) Points to the two natures in Jesus.. The WORD made flesh, the God-man, the Lord Jesus Christ. His greatness is well discussed in Hebrews Chapter 1&2.

(Isa 7:14 NIV) Therefore the Lord himself will give you a sign: The virgin will be with child and will give birth to a son, and will call him Immanuel.
(John 1:14 NIV) The Word became flesh and made his dwelling among us. We have seen his glory, the glory of the One and Only, who came from the Father, full of grace and truth.
(1 Tim 3:15-16 NIV) the mystery of godliness is great: He appeared in a body, was vindicated by the Spirit, was seen by angels, was preached among the nations, was believed on in the world, was taken up in glory.

A three layered ark. Gold, wood, Gold.
The gold covering all = God the Father.
The wood in the midst .= Jesus.
The gold within = The Holy Spirit.
All three united in the fullness of the Godhead bodily.

(Acts 2:36 KJV) Therefore let all the house of Israel know assuredly, that God hath made that same Jesus, whom ye have crucified, both Lord and Christ.

Four rings of Gold for it

(Exo 25:12 KJV) And thou shalt cast four rings of gold for it, and put them in the four corners thereof; and two rings shall be in the one side of it, and two rings in the other side of it.

These were carrying rings. One on each corner helped to balance the ark. We keep in mind the need for balance in presenting the Lord.

(Exo 25:13-15 KJV) And thou shall make staves of shittim wood, and overlay them with gold. [14] And thou shalt put the staves into the rings by the sides of the ark, that the ark may be borne with them. [15] The staves shall be in the rings of the ark: they shall not be taken from it.

Two materials show again the two natures. The staves were not to be taken out They were pilgrims in a strange land as are we. Our eternal home is in the heavenlies.

(Exo 25:17 KJV) And thou shalt make a mercy seat of pure gold: two cubits and a half shall be the length thereof, and a cubit and a half the breadth thereof.

It was from above this mercy seat God spoke to Aaron. The blood was sprinkled on this seat as an atonement for the nation of Israel. God has nothing to say to man apart from the blood of redemption. To remove the bloodstained mercy seat is to expose the law of sin and death. This was the only seat in the tabernacle but no man ever sat upon it.

(1 Sam 6:19 NIV) But God struck down some of the men of Beth Shemesh, putting seventy of them to death because they had looked into the ark of the LORD.
(Rom 8:2 NIV) because through Christ Jesus the law of the Spirit of life set me free from the law of sin and death.

(Exo 25:18 NIV) And make two cherubim out of hammered gold at the ends of the cover.

One piece of gold made up into two cherubim and the mercy seat. A divine three pointing to the triune nature of the Godhead. God was present “in the midst” of the three as the Shekinah Glory. In this visual aid can be seen Jesus; the fullness of the Godhead bodily.

Without this “Presence” all the rest would be empty form. So also in the church. We must have the Brightness of His Glory”.

(Psa 80:1 NIV) Hear us, O Shepherd of Israel, you who lead Joseph like a flock; you who sit enthroned between the cherubim, shine forth.
(Psa 99:1 NIV) The LORD reigns, let the nations tremble; he sits enthroned between the cherubim, let the earth shake.
(2 Cor 4:6 NIV) For God, who said, “Let light shine out of darkness,” made his light shine in our hearts to give us the light of the knowledge of the glory of God in the face of Christ.

The place of the Ark

The eternal city is also foursquare and is lit by the glory of God.

(Rev 21:23 KJV) And the city had no need of the sun, neither of the moon, to shine in it: for the glory of God did lighten it, and the Lamb is the light thereof.
(Rev 21:16 NRSV) The city lies foursquare, its length the same as its width; and he measured the city with his rod, fifteen hundred miles; its length and width and height are equal.

The contents of the ark

(Heb 9:4 NRSV) the ark of the covenant overlaid on all sides with gold, in which there were a golden urn holding the manna, and Aaron’s rod that budded, and the tablets of the covenant;

i. The Tablets of the Law: a type of the Father the law giver.
ii. The Golden pot of manna: the bread of life, Jesus.
iii Aaron’s rod that budded: fruitfulness and life, the Holy Spirit.

Each article tells us something of Christ’s work and ministry. Jesus fulfilled all the law. He abolished on the cross the ceremonial law and calls us to the higher law of love.

Jesus is the Golden (divine) Pot of Manna. He is the bread of eternal life. If any eat of Him they will never die. Those who overcome will be given the “hidden manna” of the Ark.

(Rev 2:17 NRSV) Let anyone who has an ear listen to what the Spirit is saying to the churches. To everyone who conquers I will give some of the hidden manna, and I will give a white stone, and on the white stone is written a new name that no one knows except the one who receives it.

The rod that budded speaks of abundant life. In Christ is all life, beauty and fruitfulness. All this fullness is to be manifested in the church.

(Eph 1:22-23 NRSV) And he has put all things under his feet and has made him the head over all things for the church, [23] which is his body, the fullness of him who fills all in all.

The journeying of the Ark speak about the Lord Jesus Christ in His birth, anointing, life ministry, death, resurrection, glorification and second coming.